The 4th Cloud Service? – VoIP As a Service (VaaS)

This weekend, i had a chance to present to Microsoft guests at their office here in Malaysia about cloud computing and focusing my talk on cloud technology security.
It was clear after a while jiving with those techies and seeing their responses and also doing much research, this concept, the relevant technologies wrapped around and more importantly, enjoying unwavering support from some of the big boys such as Google, Microsoft, Amazon, EMC, etc, one can easily deduce that the {{CLOUD}} is here to stay. This could mean a lot to consumers or business opportunists alike to ride on the wave (or as some may still insist, the hype)
In the weekend while on the treadmill at the local gym i started think about one particular service and of course being Astiostech’s core of 2 cores, Asterisk and VoIP and how it fits the 3 domains defined by the Cloud Security Alliance (CSA), and these are;
1) Software as a service
2) Platform as a service
3) Infrastructure as a service
Thinking about where would VoIP sit, it becomes quite clear to me after while that it doesn’t really belong to those categories (as far as I’ve understood them.) One would think it’s close to SaaS or Software as a service, but i beg to differ, Why?
1) VoIP is software in code, true, but its not offered as one, but rather a communication platform
2) Hosting VoIP is not the same as software, it breaks the boundaries of typical software running on computers and basically runs on IP phones rather.
3) It can connect to other software services to introduce Computer Telephony Integration or CTI to enrich one’s telephony experience but it in itself, isn’t one.
Hosted PBX isn’t something new. Astiostechtech has done so for almost 4 years now and rebranded it as e-fon ( www.efon.my ). We find such application of technology to be quite exciting then and over the years, seeing almost no downtime or complains, we are now convinced that it’s a technology and offering that could really change the way we do PBXes..
How has PBXes works for you currently and in the past.

Typically it was like the above diagram
1) Everything was at premise
2) Phones and servers communicated locally
3) Expansions were done as long as the PBX supports them
4) Most of the time, companies change their PBX when moving offices
5) Upgrades get done very sparingly as it can really blow a huge hole in the pocket
Lets talk about web servers and company websites, I can imagine almost all small and medium sized companies host their websites with local providers and do not host them internally. The reason why they host their websites is quite obvious, it’s because the service and support was there and it was just paying a very affordable monthly fee. This is closely tied to the economics of scale. They run operations of hundreds of servers and buy and rent stuff in bulk. Imagine a Hosted PBX like your Website server.
This elevates the need for running local servers, hiring experts to setup and run it and not to forget the cost of running and maintaining such infrastructure. Also to think about disaster recovery and business continuity, while, we businesses should be thinking about making money obviously, and not maintaining PBXes like we didn’t maintain our websites.
Now, imagine if the same like websites, were to be offered as a service to you in regards of telecommunications or simply, a hosted PBX instead of an on premise one. 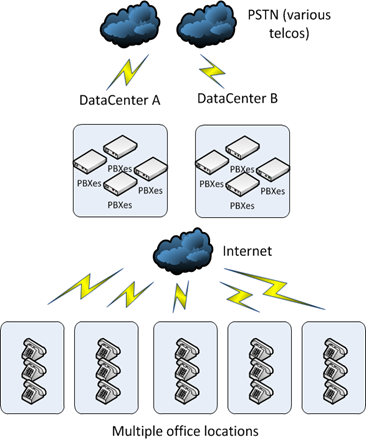 Here’s a sample provider, like Astiostech (e-fon.my) can provide you. As an end user in a small and medium sized organization running your own onsite PBX is shortly becoming a thing of the past. Imagine again these infrastructures are now placed in cloud computing technology.
First and foremost; hosting outside your premise and into services like e-fon can help
1) Re-size on the fly
2) Gain mobility and do not lose your “favourite” phone numbers
3) It has all you need or even more than you can expect. (Economies of scale)
4) Its cheaper to have enterprise features, remember, the economies of scale! Make your organization sound like a multi-billion dollar setup (perception helps btw)
5) Connect to multiple types of Telcos that the PBX provider subscribes to and enjoy rates they enjoy as well
6) Connect to your other offices flawlessly if they use common protocols such as SIP or H323
7) Do not worry about upgrades as its done centrally
8) Use different types of phones or even free ones like softphones
Those you get with Hosted PBXes, i am sure or at least with e-fon you do. But here’s the kicker, with now cloud computing, e-fon gets hosted on cloud services. Not only you enjoy those highlighted list of benefits above, you also can enjoy that offered by putting stuff on cloud computing architecture such as;
1) Fabric on demand (CPU, disk, memory)
2) Auto and transparent redundancy
3) Strong network architecture and bandwidth
4) Probably more secure than if you ever had to put on premise
5) Ride on credible cloud providers for credible service offering
I can imagine in the next few years, this would be the “talk of town” per-se. Hosted PBX will be on just about all companies and hosting on premise even with a keyphone system isn’t attractive or make any sense anymore to business people. Just like how hosting websites took a while before just about all friends and companies i know in the small and medium category of companies have their websites with a provider or in a cloud alike.
From the Astiostechtech Engineering Office…